This year, Moundville Archaeological Park is celebrating Native American Heritage Month with an exhibit, a virtual 5K, a pottery activity, a cooking demonstration, and a month-long photo challenge!

This exhibit will also include a make and take craft, that students will be able to take back to their dorms to complete. 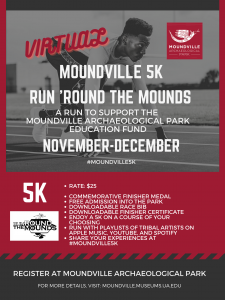 Throughout November and December 2020, Moundville Archaeological Park is hosting a virtual 5K to support their Education Fund! Participants are encouraged to run on a 5K course of their choosing and will be awarded with a commemorative finisher medal and downloadable finisher certificate.

After your 5K is completed, make sure to share your experience with Moundville Archaeological Park on social media by using the hashtag: #Moundville5K

When visitors tour the Jones Museum at Moundville Archaeological Park, Mississippian-era pottery is, by far, the type of artifact they’ll see the most. Pottery found at Moundville is uniquely displayed. Transparent cases form a series of square archways that visitors walk through, able to view each piece from a number of angles, including the bases of many pots. 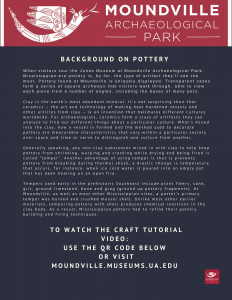 Clay is the earth’s most abundant mineral. It’s not surprising then that ceramics – the art and technology of making heat hardened vessels and other articles from clay – is an invention that hallmarks different cultures worldwide. For archaeologists, ceramics form a class of artifacts they can analyze to find out different things about a particular culture. What’s mixed into the clay, how a vessel is formed and the method used to decorate pottery are measurable characteristics that vary within a particular society over space and time or serve to distinguish one culture from another.

Generally speaking, any non-clay substances mixed in with clay to help keep pottery from shrinking, warping and cracking while drying and being fired is called “temper”. Another advantage of using temper is that is prevents pottery from breaking during thermal shock, a drastic change is temperature that occurs, for instance, when ice cold water is poured into an empty pot that has been heating on an open fire.

Tempers used early in the prehistoric Southeast include plant fibers, sand, grit, ground limestone, bone and grog (ground up pottery fragments). At Moundville, as well as most other Mississippian sites, a potter’s primary temper was burned and crushed mussel shell. Unlike most other earlier materials, tempering pottery with shell produces chemical reactions in the clay body. As a result, Mississippian potters had to refine their pottery.

Take a lump of clay and form it into a ball. Insert your thumb into the center of the ball, leaving about 1/2 inch of clay on the bottom for a base (A). Gently press the clay into shape using your thumb on the inside of the ball and your fingers on the outside. Press the clay and rotate the ball, slowly repeating this as you work, thinning the base of the pot first, then working gradually up the side wall (B). Try to keep the walls of the vessel the same thickness throughout. An overall thickness of about 1/4 inch is ideal. Using your fingers or a polished stone, smooth the walls of the vessel (C). If needed, trim the top edge (the lip) of the pot with a piece of flint or a cane knife. Decorate using the tools provided. 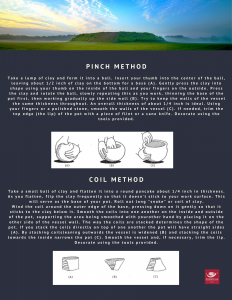 Take a small ball of clay and flatten it into a round pancake about 1/4 inch in thickness. As you flatten, flip the clay frequently so that it doesn’t stick to your work surface. This will serve as the base of your pot. Roll out long “snake” or coil of clay.

Wind the coil around the outer edge of the base, pressing down on it gently so that it sticks to the clay below it. Smooth the coils into one another on the inside and outside of the pot, supporting the area being smoothed with yourother hand by placing it on the other side of the vessel wall. The way the coils are stacked determines the shape of the pot. If you stack the coils directly on top of one another the pot will have straight sides (A). By stacking coilsleaning outwards the vessel is widened (B) and stacking the coils towards the inside narrows the pot (C). Smooth the vessel and, if necessary, trim the lip. Decorate using the tools provided.

The Intercultural Diversity Center and the Women Gender & Resource Center will be hosting a live cooking demonstration featuring Grayhawk Perkins to learn about indigenous cooking and how it relates to culture and gender. New Orleans-born Grayhawk Perkins is a well-known cultural figure in Louisiana. He works as an educator, historian, and a musician, teaching music, history, writing, and environmental studies to students from Pre-K to college level. The zoom link will be provided after registration is complete. This event will take place on Thursday, November 12, 2020 at 6:00pm.

Register for this event here:
https://www.eventbrite.com/e/native-american-heritage-month-cooking-demonstration-with-grayhawk-perkins-tickets-126862734855

During the month of November, you can participate in a photo challenge with Moundville Archaeological Park! Each day will have a photo prompt that will encourage you to take a picture, interpreting what that prompt means to you.

To share it with us on social media, use the hashtag: #MoundvilleNAHM2020

Below are the prompts for each day of November. Have fun! 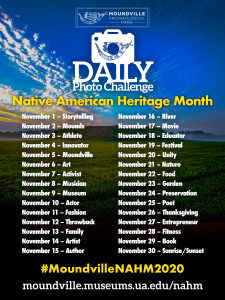