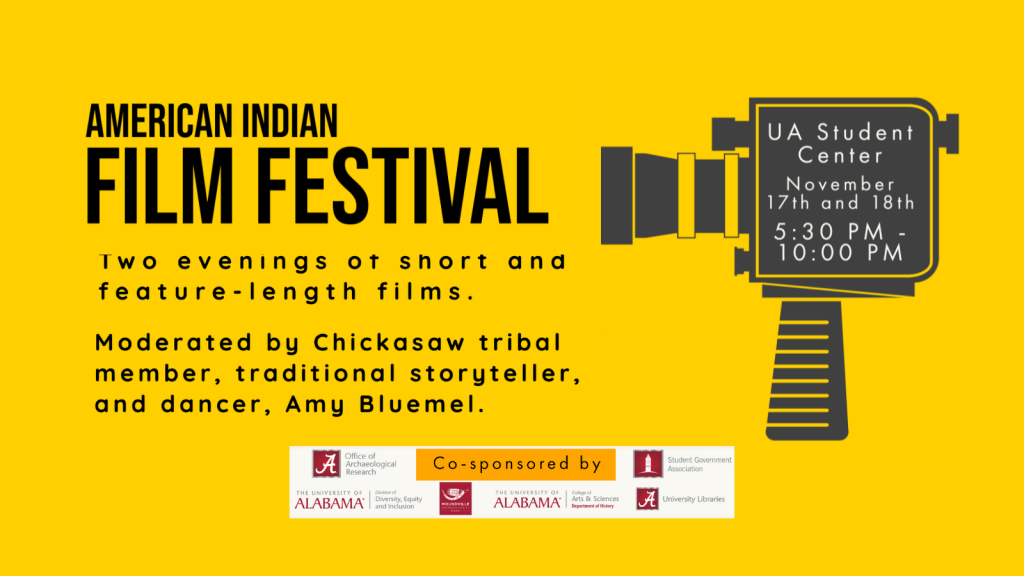 The American Indian Film Festival is planned for November 17-18, 2021, with films shown from 5:30 PM to 10:00 PM on both days at The University of Alabama Student Center Theater. This FREE film festival will include films from the Chickasaw Nation, Muscogee (Creek) Nation, Choctaw Nation of Oklahoma, Cherokee Nation, the Eastern Band of the Cherokee Indians, Kiowa, with other tribes highlighted. Amy Bluemel, Chickasaw storyteller, will be the MC for both evenings. 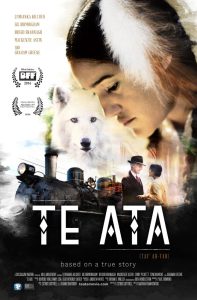 TE ATA (TAY’ AH-TAH) is based on the inspiring, true story of Mary Thompson Fisher, a woman who traversed cultural barriers to become one of the greatest First American performers of all time. Born in Indian Territory, and raised on the songs and stories of her Chickasaw culture, Te Ata’s journey to find her true calling led her through isolation, discovery, love and a stage career that culminated in performances for a United States president, European royalty and audiences across the world. Yet, of all the stories she shared, none are more inspiring than her own. 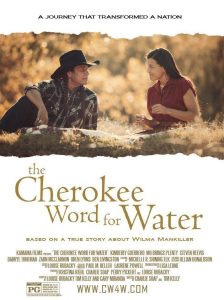 Based on the true story of the Bell Waterline Project, THE CHEROKEE WORD FOR WATER shares the struggle for, opposition to, and ultimate success of a rural Cherokee community to bring running water to their families by using the traditional concept of “gadugi “- working together to solve a problem.

Set in the early 1980s, the film begins in the homes of a small town in rural Oklahoma where many houses lack running water and others are little more than shacks. Told from the perspective of Wilma Mankiller and full-blood Cherokee organizer Charlie Soap, these leaders join forces to battle opposition and build a 16-mile waterline system using a community of volunteers.

In the process, they inspire the townspeople to trust each other, to trust their way of thinking, and to spark a reawakening of the universal indigenous values of reciprocity and interconnectedness. This project also inspired a self-help movement in Indian Country that continues to this day. The movie is dedicated to Wilma Mankiller’s vision, compassion and incredible grace. (ua.Kanopy.com)

“The Cherokee Word for Water will hopefully inspire similar collective efforts in other communities, and demonstrate the necessity of strong women in positions of power in our society.” MS. MAGAZINE 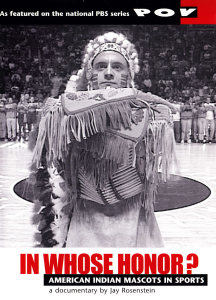 In the Jay Rosenstein film, In Whose Honor: American Indian Mascots in Sports, we look at the controversial subject of Indian mascots. This documentary film follows the story of Charlene Teters, a Spokane Indian, and her fight to protect and preserve her cultural identity for her community and her children. This film allows an in-depth look at the controversial subject of Indian mascots being used as a symbol for multiple well-known sports teams. Charlene takes on these large institutions by explaining how these mascots are not a way of “honoring” Native Americans but is perpetuating racism and stereotypes against Native Americans. Just because Indian mascots have been used for years in sports doesn’t make it right.

The Choctaw Nation of Oklahoma Historic Preservation Department’s Indigenous Archaeology program works to keep the Tribe compliant with Federal Law. In this film, Dr. Kristen Walczesky, the Tribal Archaeologist, describes the value that Indigenous Archaeology provides to the Nation. Dr. Walczesky helps create inclusive collaboration methodologies and uses ethical excavation practices to work with Choctaw Nation and federal, state, and local entities to complete the Section 106 review process. Listen as she discusses the many and various tasks involved in being a Tribal Archaeologist.

For information about Indigenous Archaeology, please reach out to the Historic Preservation Department at historicpreservation@choctawnation.com

The Choctaw Nation Historic Preservation Department staff talk about the history of the Native American Graves Protection and Repatriation Act (NAGPRA), the very meaningful work they do for their ancestors and Nation, and why this law means so much to American Indians. The connection to Moundville, the traditional homelands, and to the resources themselves in the homelands is also discussed.

Choctaw Nation of Oklahoma describes the film thusly, “This short film highlights the Choctaw community’s long history of advocacy for our deceased loved ones and our dedication to advocate on their behalf since the passing of NAGPRA regulations 30 years ago. It explains the No Stone Unturned project and the passion our NAGPRA team exhibit in finding them lasting peace.”

For information about the NAGPRA program of the Choctaw Nation of Oklahoma, please reach out to the Historic Preservation Department at dbyrd@choctawnation.com

7:00-7:05 Sandra Denney will speak about the Dawes Commission film. 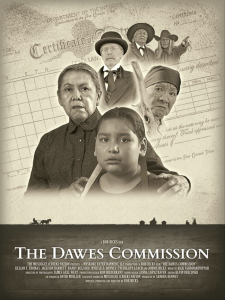 After several years of the removal of the Mvskoke (Muscogee) Creek (with other Native Nations form the east coast), the US government tries to settle giving land to each member of the tribal member. The story of this film focuses on one family, The Harjo’s.

The Dawes Commission, named for its first chairman Henry L. Dawes, was authorized under a rider to an Indian Office appropriation bill in 1893. Its purpose was to convince the Five Civilized Tribes to agree to cede tribal title of Indian lands, and adopt the policy of dividing tribal lands into individual allotments that was enacted for other tribes as the Dawes Act of 1887.

In November 1893, President Grover Cleveland appointed Dawes as chairman. During this process, the Indian nations were stripped of their communally held national lands, which was divided into single lots and allotted to individual members of the nation. The Dawes Commission required that individuals claim membership in only one tribe, although many people had more than one line of ancestry. Registration in the national registry known as the Dawes Rolls has come to be critical in issues of Indian citizenship and land claims. 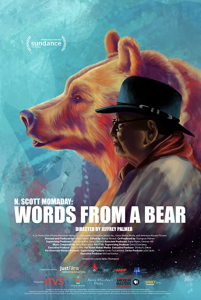 Words from a Bear examines the enigmatic life and mind of Pulitzer Prize winning author, Navarro Scott Momaday. This profile delves into the psyche behind one of Native America’s most celebrated authors of poetry and prose. Words from a Bear visually captures the essence of Momaday’s writings, relating each written line to his unique Kiowa/American experience representing ancestry, place, and oral history.

Words from a Bear is a fresh and distinctive approach to biographical storytelling. Cinematically, this story takes audiences on a spiritual journey through the expansive landscapes of the West, when Momaday’s Kiowa ancestry roamed the Great Plains with herds of buffalo, to the sand-painted valleys of Jemez Pueblo, New Mexico where his imagination ripened and he showed superior writing skills as a young mission student. The biography will give a thorough survey of Momaday’s most prolific years as a doctorate fellow at Stanford University, his achievement of the Pulitzer Prize for Literature in 1969, and his later works that solidified his place as the founding member of the “Native American Renaissance” in art and literature, influencing a generation of Native American artists, scholars, and political activists.

Although his unique heritage is a central theme of the narrative, Momaday’s work asks the questions every audience can relate to: what are our origins and how do we connect to them through our collective memories? Through his literature and the cinematic visuals, the film will illuminate how Momaday has grappled with these basic questions of human existence and his own identity. The film will reveal the most intimate details of the writer’s personal life as revealed through his literary texts, along with the trials and tribulations he faced as a Native American artist in the twentieth and twenty first century. Historical photos, original animation, and stunning aerials of landscapes, will complement captivating interviews with Robert Redford, Jeff Bridges, Beau Bridges, James Earle Jones, and Joy Harjo, to bring audiences inside the creative core of this American Master.

She Carries On, produced by Dr. Natalie Welch, a member of the Eastern Band of Cherokee Indians and assistant professor of sport management at Linfield University, follows the story of nearly 100 women who came together to play stick ball in 2000. It explores what the game means to these women, their families, and their community.

Sacred Stick examines the historical, cultural, and spiritual aspects of lacrosse. From the ancient Maya to the world-famous Iroquois Nationals team, this program explores a uniquely Indigenous sport that, like Native peoples themselves, adapted and endured within the dominant culture. As lacrosse surges in popularity, it has now become the fastest growing sport in North America. But for Native peoples, it has always been and continues to be much more than a game.

This documentary examines the way lacrosse, or stick ball, is intertwined with various American Indian cultures, largely focusing on the northeastern United States.